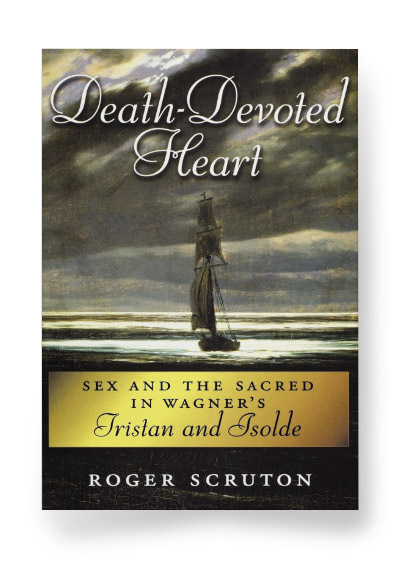 Death-Devoted Heart: Sex and the Sacred in Wagner's Tristan and Isolde

A tale of forbidden love and inevitable death, the medieval legend of Tristan and Isolde recounts the story of two lovers unknowingly drinking a magic potion and ultimately dying in one another's arms.

"Death-Devoted Heart is a book on music, tragedy, love, sacrifice and redemption. It is partly a brilliant critical/theoretical study, partly a manifesto for a new religion. It's a rare case of a philosopher really telling you what it's all about." - Tom Lubbock, The Guardian Review

RT @matraszek: At last my own copy of the great ⁦⁦@HorcherF⁩ ‘s tome on ⁦@Roger_Scruton⁩ has arrived. Can’t wait to digest and enjoy in the…
In loving memory of writer and philosopher Roger Scruton. Two new books to seek out:𝘛𝘩𝘦 𝘔𝘦𝘢𝘯𝘪𝘯𝘨 𝘰𝘧 𝘔𝘰𝘶𝘳𝘯𝘪𝘯𝘨 ed. Mi… https://t.co/8FrU8ixI7K
Just in time for Christmas...details of our Summer School Programmes can now be found on the website https://t.co/8ucm2u1Z5j
Follow Scrutari semper on Twitter