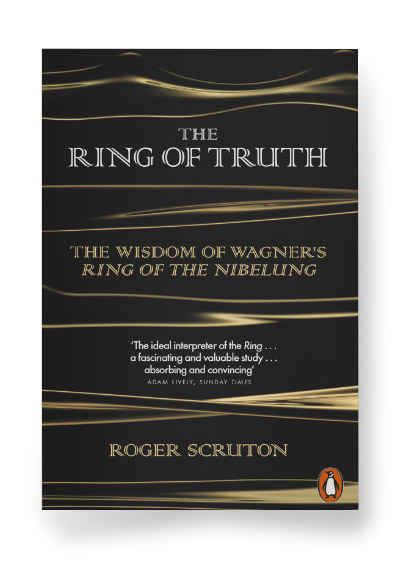 The Ring of Truth

Richard Wagner's Ring of the Nibelung is one of the greatest works of art created in modern times, and has fascinated both critics and devotees for over a century and a half. No recent study has examined the meaning of Wagner's masterpiece with the attention to detail and intellectual power that Roger Scruton brings to it in this inspiring account.

The Ring of Truth is an exploration of the drama, music, symbolism and philosophy of the Ring from a writer whose knowledge and understanding of the Western musical tradition are the equal of his capacities as a philosopher.

Scruton shows how, through musical connections and brilliant dramatic strokes, Wagner is able to express truths about the human condition which few other creative artists have been able to convey so convincingly. For Wagner, writes Scruton, the task of art is to 'show us freedom in its immediate, contingent, human form, reminding us of what it means to us. Even if we live in a world from which gods and heroes have disappeared we can, by imagining them, dramatize the deep truths of our condition and renew our faith in what we are.'

Love, death, sacrifice and the liberation that we win through sacrifice - these are the great themes of the Ring, as they are of this book. Scruton's passionate and moving interpretation allows us to understand more fully than ever how Wagner conveys his ideas about who we are, and why the Ring continues to be such a hypnotically absorbing work.

News from Scrutopia - https://t.co/ROHIoXoO4m
The Scrutopia Summer School. We are thrilled to share our latest video with you all. https://t.co/do3ahvbYAv This u… https://t.co/BboT2jZmUp
The Roger Scruton Memorial Lecture Series returns on Mon 17 Oct at the Sheldonian Theatre. Katharine Birbalsingh wi… https://t.co/cvvaMIB4bZ
Follow Scrutari semper on Twitter